“We are pleased the 1.07% first quarter of fiscal year 2020 return on assets matched full fiscal year-end 2019 results, even after absorbing $317 thousand in merger related costs. Strong deposit growth in our new markets has supported growth in our commercial, residential mortgage and consumer loan sectors. New banking relationships have resulted in an 8.9% increase in net interest income and a 36.4% increase in gains on the sale of residential mortgages and a 9.2% increase in consumer-based debit card interchange income over first quarter of fiscal year 2019. Further, historically low nonaccrual and loan delinquency rates are also reflected in the year-to-date results. Preparations are continuing for an anticipated early January 2020 closing of the merger between Consumers and Peoples National Bank of Mount Pleasant that was announced in June 2019,” said Ralph J. Lober II, President and Chief Executive Officer.

increased by 18.0% and debit card interchange income increased by 9.2% from the same prior year period.

Other expenses increased by $621 thousand, or 16.9%, for the three-month period ended September 30, 2019 compared to the same prior year period primarily as a result of $317 thousand of expenses associated with the expected merger between Consumers and Peoples Bancorp of Mt. Pleasant, Inc.

Consumers provides a complete range of banking and other investment services to businesses and clients through its fifteen full-service locations and one loan production office in Carroll, Columbiana, Jefferson, Stark, Summit and Wayne counties in Ohio. Information about Consumers National Bank can be accessed on the internet at http://www.consumersbank.com.

Forward-Looking Information
This press release contains forward-looking statements within the meaning of the Private Securities Litigation Reform Act of 1995 (“PSLRA”). These statements include statements relating to the proposed merger of Peoples Bancorp with and into Consumers and the post-merger integration, the combination of their businesses and projected revenue, as well as profitability and earnings outlook. The words “may,” “continue,” “estimate,” “intend,” “plan,” “seek,” “will,” “believe,” “project,” “expect,” “anticipate” and similar expressions are intended to identify forward-looking statements. These statements are subject to inherent risks and uncertainties that could cause actual results to differ materially from those anticipated at the date of this press release. These risks and uncertainties include, but are not limited to, the following: the risk that the proposed transaction may not be completed in a timely manner, or at all; the failure to satisfy the conditions precedent to the consummation of the proposed transaction; unanticipated difficulties or expenditures relating to the proposed transaction? legal proceedings, including those that may be instituted against Consumers, its board of directors, its executive officers and others? disruptions of current plans and operations caused by the announcement and pendency of the proposed transaction and the resulting integration of Peoples Bancorp with Consumers; potential difficulties in employee retention due to the announcement and pendency of the proposed transaction? any failure to meet expected cost savings, synergies and other financial and strategic benefits in connection with the proposed transaction within anticipated time frames or at all; the response of customers, suppliers and business partners to the announcement of the proposed transaction? risks related to diverting management’s attention from Consumers’ ongoing business operations; material unforeseen changes in the financial condition or results of Consumers National Bank’s (Consumers’ wholly-owned bank subsidiary) customers; regional and national economic conditions becoming less favorable than expected, resulting in, among other things, a deterioration in credit quality of assets and the underlying value of collateral could prove to be less valuable than otherwise assumed or debtors being unable to meet their obligations; rapid fluctuations in market interest rates could result in changes in fair market valuations and net interest income; pricing and liquidity pressures that may result in a rising market rate environment; competitive pressures on product pricing and services; the economic impact from the oil and gas activity in the region could be less than expected or the timeline for development could be longer than anticipated; and the nature, extent, and timing of government and regulatory actions. While the list of factors presented here is, and the Risk Factors starting on page 16 of the registration statement on Form S-4/A filed with the SEC on September 4, 2019 related to the merger of Consumers/Peoples, are considered representative no such list should be considered to be a complete statement of all potential risks and uncertainties. Unlisted factors may present significant additional obstacles to the realization of forward-looking statements. The forward-looking statements included in this press release speak only as of the date made and Consumers does not undertake a duty to update or revise any forward-looking statement, whether as a result of new information, future events or otherwise, except as required by law. 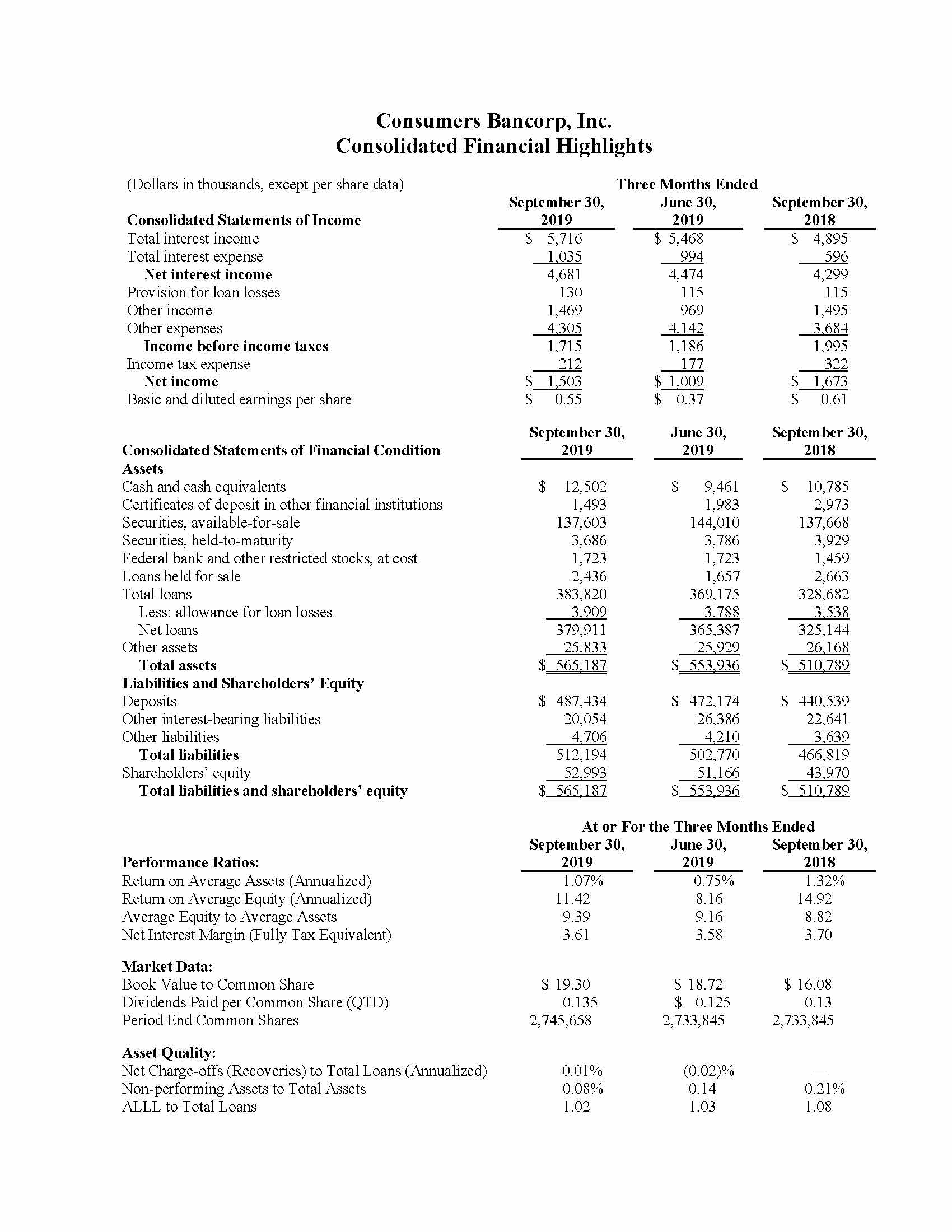